A recent commission for a good bunch of guys, The guys in question are a local Punk band called Primeval Soup, who as well as preaching against wrong doings in the world and standing up for what they believe in they actually fight it.. ./. Raising money for charity, hunt sabotaging and boycotting . ../. This art work is designed to couple with a track focusing on animal rights, and whilst i am a vegetarian myself i’ve never had the guts to take it as far as these guys.. ./ . More to come. /. 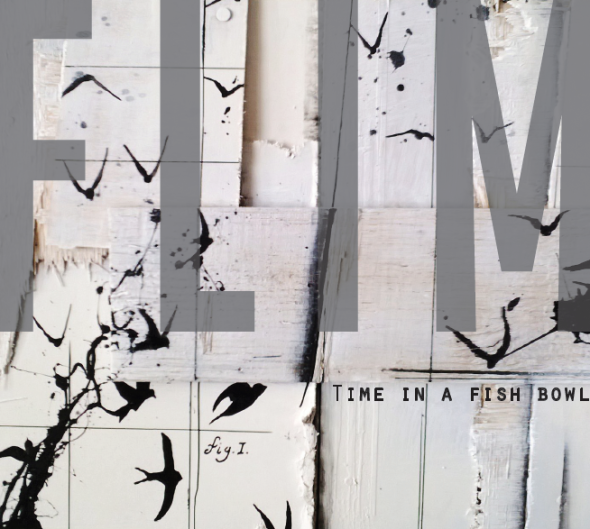 A while back now i was contacted by a guy who saw my show ‘Everything Changes’ we got talking about art and music and the blending of the two. /./. His name was Giovanni and i later found out that both he and his band we based in Italy. /. After mutually falling in love with each others craft I ended up doing the artwork for their newest release/. / .FLIM – Time In A Fish Bowl.

Now this week they will be releasing a track for free off the upcoming album, Due date Feb2014./.
Now i urge you to go and give these guys a listen, not just because i’ve done the artwork but because they really are awesome./ ./.

I look forward to more projects like this in the future. /

This is slightly off topic but Bjork has played a huge part in the making of my work and is without doubt one of the most important artists of our lifetime… . .. ..

Created by manipulating and painting the doll, in front of a hand painted background. And then setting a fire underneath the lens to create the smoke.. . . /. /.

A while back on a freezing winter night a very close friend of mine was putting on a show in the monument gallery castle in Southampton, right at the last minute he need to find a photographer.. . . and well i have a camera and i liked the acts playing so i was chosen. The venue its self was enough of an excuse to go along but the bands on the bill were all fantastic too. The head-liner who i was especially enthusiastic about was Franz Nicolay previously of The Hold Steady. I’d seen and met him once before but that as only in passing, So i knew i had to go.

Though the heating in the venue had packed up by the time the show started the whole evening flew by in a blizzard of sub zero temperatures and snow white smiles. Everyone had had an awesome evening shouting along in a castle and i had got thousands of photos. Upon arriving home post gig i started reviewing the photos, i noticed that Franz was a hard man to capture still. I had quite a good collection of blurred faces, i decided to keep them for future reference. I later forgot about them and carried on painting as i normally would.

But Yesterday i stumbled upon them again and decided to do a quick series on Franz’s head, i had some old bits of slate lying around and so i figured considering the venue this would be the perfect medium. . … . . .. …. . . /. Here is ‘Franz Head Collection I-V’

I’m just about finished on a commission for ‘Primeval Soups’ new album cover, An anarcho punk band based in Brighton who are also good friends of mine .. . . Just waiting on the font and the title. .. . .

The whole finished product will come in the next coming days, meanwhile give these guys a look http://www.myspace.com/primevalsoup

As some of you may know from previous posts  my Grandparents had this charcoal drawing up for years which a close friend of theirs had drawn for them, They were huge jazz fans and I never really got it as a kid jazz or the picture, As is with everything in life that inevitably changes.

The original drawing in question has ended up in my living room and is due to change hands again. Truth be told i don’t want to see it go but its out of my hands, Which has left me with a very large void so i decided to do a scale painting of the exact piece, Here’s the original and my version below. .. .. … . . . .

Not the greatest picture in the world but heres the progress on Jubilee Jazz.. . . . 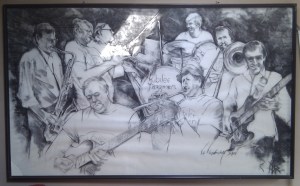 Full piece coming soon in the meantime check these guys out at…………………….,